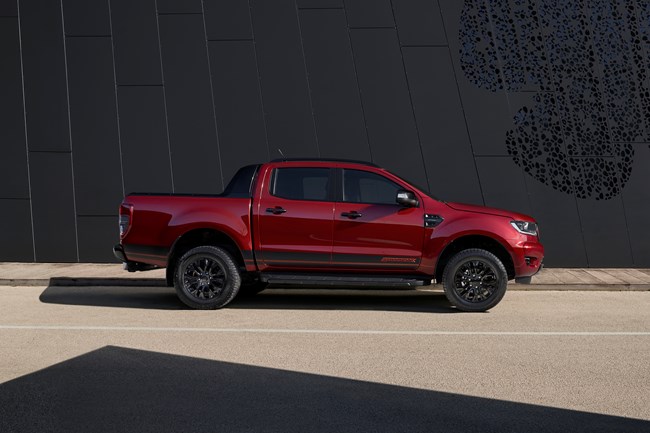 The Ranger Stormtrak and Wolftrak are both set to arrive at dealers this October.

The Ranger Stormtrak will come with the range-topping 213hp diesel engine, with selectable four-wheel drive and ten-speed automatic transmission.

It will feature exclusive Rapid Red exterior paint (white and blue options are also available) and a red grille insert, along with LED headlights, underbody protection, bonnet and side decals, three-dimensional badging, and a black rear bumper and sports hoop.

It will also come with a bedliner, load divider, and a power roller shutter, newly available as an option with the Ranger Wildtrak, which allows the shutter to be operated via the truck’s key fob, or using buttons in the load bay and on the dashboard.

Inside, the Stormtrak will get seats that feature embroidered Stormtrak logos and bolsters trimmed with technical fabric, along with interior surfaces finished in Tinted Graphite, and red stitching.

The Ranger Wolftrak will come with a 170hp diesel engine, and either six-speed manual or ten-speed automatic transmission.

Selectable four-wheel drive will be standard, with shift-on-the-fly function, and an electronically-locking rear differential and all-terrain tyres will also be included.

The Wolftrak will be available in Conquer Grey or Sea Grey paint, and come with a matte black grille, underbody protection, and 17in black alloy wheels.

A protective bed liner will be standard, with a manual load bed cover or Aeroklas full load canopy, both in matte black, available as options. A long-leg tubular sports bar will also be included.

The interior will feature Wolftrak badges, a matte black instrument panel and door spears, and all-weather floor mats. Ford’s Sync 3 infotainment system with 8in touchscreen will also be standard.

Prices for the Ranger Stormtrak and Wolftrak are yet to be announced.