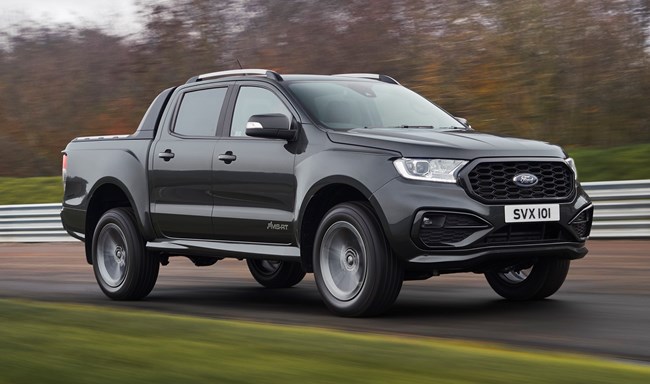 Ford has announced a new performance version of its Ranger pick-up, developed in partnership with tuning company MS-RT.

The new Ranger MS-RT is based not on the existing range-topping Raptor performance model, but on the second-highest-spec Wildtrak. However, unlike the Raptor, the MS-RT retains a payload of over one tonne, while featuring the same 213hp diesel engine and ten-speed automatic gearbox.

MS-RT uses styling and technology inspired by Ford’s works rally team in its LCV conversions, with the Ranger joining models based on the Transit Custom and Transit Connect vans in its range.

Exterior features of the company’s Ranger include a hand-built front fascia with a honeycomb carbon fibre-effect grille and integrated fog lights, while the side of the vehicle features extended wheel arches, surrounding 29in OZ Racing alloy wheels, and sculpted side skirts.

A Maxhaust app-controlled soundbox is available as an option.

The Ranger MS-RT will be available at Ford dealers from this summer. Prices are yet to be announced.