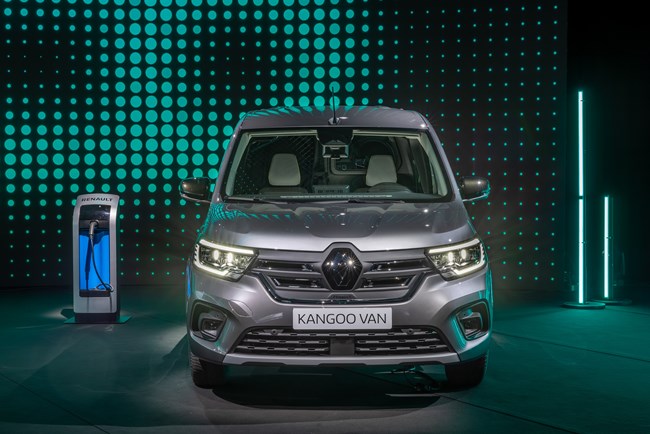 Renault has revealed details of its new Kangoo Van, which will go on sale in the UK at the start of 2022.

The compact van will once more be offered in two body lengths and, although UK specifications are yet to be confirmed, in continental Europe it will come to market with a choice of petrol and diesel engines and as a pure electric model, which is expected to be named the Kangoo E-Tech rather than retaining the current Kangoo Z.E moniker.

The electric Kangoo comes with a 44kWh battery and a 75kW (102hp) motor that can be switched to 55kW (75hp) in Eco mode to optimise range, which Renault claims extends to 165 miles on the WLTP cycle.

The manufacturer says the battery can be rapid-charged to 80% capacity in 42 minutes with a 75kW charger and to the same capacity in two hours from a 22kW public charging point. It can be fully charged in 4.5 hours from an 11kW terminal, but a full charge from a domestic socket will take 26 hours.

The Kangoo’s 1.5 Blue dCi diesel engine is available with outputs of 75, 95 and 115hp. The smallest powertrain comes with six-speed manual transmission while the larger pair can also be married to a seven-speed automatic EDC gearbox.

The 1.3 TCE PF petrol engine is offered in 100hp with the manual ‘box and in 130hp with either the manual or auto ‘box.

In addition, Ecoleader versions of the 130hp petrol and 115hp diesel engines include fuel-saving measures, such as a top speed electronically capped at 68mph and an Eco-Mode that Renault says cuts fuel consumption by 12%.

This results in claimed WLTP consumption of 46.3mpg for the petrol and 57.6mpg for the diesel, a modest 3mpg better than the standard engines. All models in the range get stop-start as standard.

The standard-length Kangoo has a payload of 600kg but this rises to 800kg with an as yet unspecified ‘increased payload option’ according to Renault. The long version has a payload of just under 1.0-tonne plus a maximum towing limit of 1.5-tonnes.

Load space in the standard van goes from 3.3m3 with a solid bulkhead to 3.9m3 with the swivelling bulkhead and fold-down seat on the passenger side. In the long version capacity goes from 4.2m3 to 4.9m3, which is just below the Kangoo’s big brother, the Trafic, which starts with a 5.0m3 load box.

Renault claims the 1,247mm width between the wheel arches is sufficient to accommodate a Europallet.

The Kangoo is available with the Permanent Rear View Assist, which is already offered with the Master large van and fulfils the function of a rear-view mirror when the van has a solid bulkhead. Other notable driver-assistance features include Lane Departure Warning, Lane Keeping Assist, Active Blind Spot Monitoring, Autonomous Emergency Braking and Adaptive Cruise Control with Stop & Go, which regulates the distance between the van and the vehicle in front and with automatic transmission can bring the van to a halt in traffic. Also up for grabs is the EasyPark Assist Hands-Free Parking automatic parking system and all-round sensors.

Unfortunately, the UK’s right-hand drive models will miss out on the new Kangoo’s most striking innovation, the Open Sesame side entry that creates a huge 1,446mm load access point through the removal of the B-pillar between the passenger door and sliding door.

Right-hand drive vans will, however, get the new Easy Inside Rack, an interior roof rack that can hold items of up to 2,500mm.