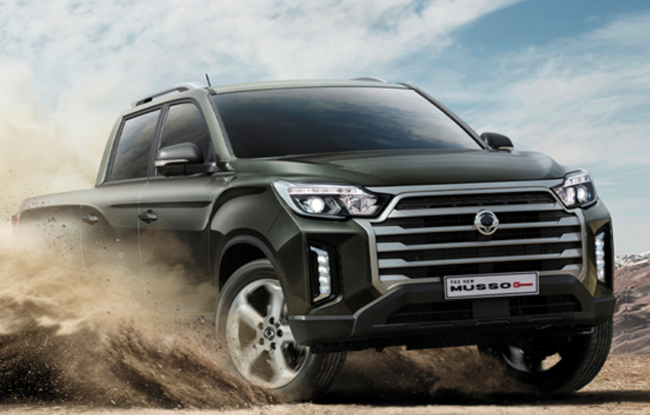 Ssangyong’s facelifted Musso pick-up truck will be available in three specification levels when it comes to market in the UK in the fourth quarter of 2021.

Powered by the same 2.2-litre 180hp diesel engine that serves the current model, the entry-level Musso will be manual only whereas the Rebel and Saracen grades will only be offered with automatic transmission, according to Ssangyong UK’s managing director Kevin Griffin, who says sales patterns indicate this strategy reflects customer demand in the UK’s pick-up sector.

Sporting a new, more aggressive-looking front end, Griffin said the Musso, which is only produced as a double-cab, “is now more Rextonised” – in that its design is far closer to that of the brand’s large SUV, the Rexton, than the outgoing version.

Several manufacturers have withdrawn their models from the UK’s pick-up market in the last 18 months and of those remaining Griffin names the Isuzu D-Max as the Musso’s main rival rather than the Ford Ranger and Toyota Hilux.

Griffin also says few customers would weigh up a Musso next to a Hilux when choosing a pick-up.

“Toyota we never come across, they [Toyota customers] never come into our showrooms,” he said. “The Hilux is tooled as a fleet model.”

“Isuzu never stole business off us, they stole it from the [Mitsubishi] L200.”

He added that since Mitsubishi had withdrawn the L200 last year Musso sales had doubled with customers attracted by its seven-year warranty and with supply improving following lockdown.

Griffin predicts Ssangyong UK will sell 1,000 Mussos in 2021 but will prevent registrations from exceeding this number in order to remain exempt from the UK’s emissions charge as a small-volume manufacturer.

He claims the introduction of the electric Korando e-Motion later this year would lower the brand’s overall emissions and enable it to sell more Musso pick-ups from 2022 and says Ssangyong will launch an electric Musso in 2023.