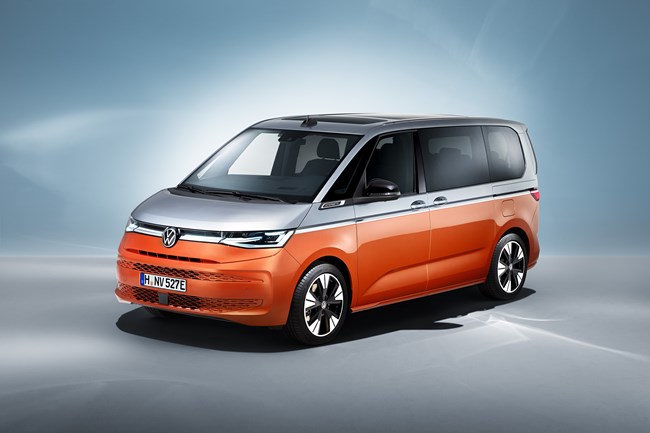 Volkswagen Commercial Vehicles (VWCV) has revealed its new Multivan, which will replace the Caravelle when it comes to market towards the end of 2021.

Unlike its predecessor, which was built on the Transporter platform, VWCV will assemble the Multivan on its MQB platform that produces passenger cars, such as the Golf, and also spawns the Caddy and Caddy Cargo compact van.

The manufacturer will offer the front-wheel drive only Multivan with three powertrains, including, for the first time in a VWCV model, a plug-in hybrid engine. The Multivan eHybrid pairs a 1.4 TSI petrol 150hp engine with an 85kW electric motor to produce power output of 160kW (218hp). VWCV claims it has a pure electric range of up to 50km (31 miles). The eHybrid is married to a six-speed DSG gearbox and the electric charging point is located on the right-hand side of the front wing. The Multivan is also available with two four-cylinder turbocharged petrol engines: a 1.5 TSI 136hp and a 2.0 TSI 204hp unit. A 2.0 150hp four-cylinder turbo diesel will join next year, according to VWCV. These engines are all twinned with the brand’s seven-speed DSG gearbox.

A longer wheelbase than previous versions gives the new Multivan, which can seat up to seven people, a lower slung, more stretched out exterior appearance compared to predecessors. The wheelbase supports two vehicle lengths: Standard and Long. The new Multivan is 1,941mm wide, excluding the optional electric fold-in wing mirrors (+37mm compared to the Multivan 6.1), 4,973mm long (+69 mm) and up to 1,903mm high (-47 mm). Its wheelbase measures 3,124 mm (+124 mm). The long version measures 5,173mm from bumper to bumper, making it 131 mm more compact than its predecessor.

The rear hatch and sliding side doors are offered with ‘Easy open and close’ opening via a foot gesture. A panoramic glass roof is also optional and electric switches have replaced the gear lever and handbrake to create more interior space. Load volumes go up to 3,7m3 on the standard version and up to 4.0m3 on the long version, payloads range from 683kg to 915kg and the maximum towing capacity is 2.0-tonnes.

The Multivan features a digitalised cockpit with a 10in touchscreen and multi-function steering wheel and a choice of connectivity systems that include the ability to lock and unlock the vehicle and control the heater via a smartphone.

VWCV says the Multivan features 34 driver assist systems covering safety, comfort, and convenience. Standard is the Front Assist area monitoring system, which includes city emergency braking, a road sign display and lane assist system. The Multivan will come in three specifications: Multivan, Life and Style. The manufacturer says it will be sold alongside the Transporter 6.1 panel van a and will bridge the gap to the all-electric ID Buzz, which will come to market in 2022.