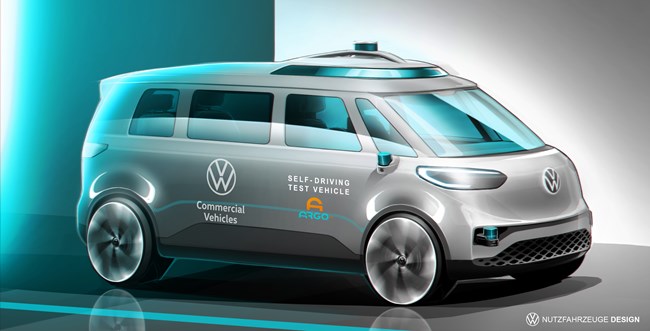 Trials of autonomous driving technology, with the plan of introducing it for road use by 2025, have been announced by Volkswagen Commercial Vehicles.

It says field trials will be carried out in Germany this year, using a version of the ID. Buzz electric van equipped with Argo AI self-driving technology.

VW has invested in Argo in an equal share with Ford, as part of the two manufacturers’ cooperation agreement.

VW’s CV arm has been given responsibility for developing fully autonomous systems and their commercial use in urban areas, with applications such as robo-taxis and vans.

The ID. Buzz has previously been unveiled as a concept vehicle – the production version is set to be revealed next year.

“In the middle of this decade, our customers will then have the opportunity to be taken to their destination in selected cities with autonomous vehicles."