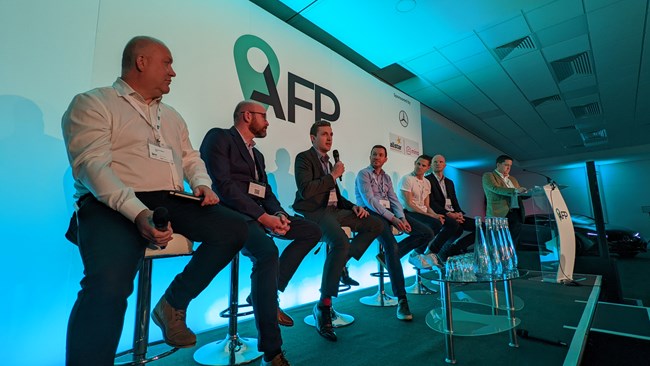 That’s according to speakers at this week’s Association of Fleet Professionals (AFP) annual conference.

Panellists including Centrica fleet engineer James Rooney were asked whether the current vehicle supply crisis – prompted by a global shortage of components such as semiconductors – would have an effect on organisations’ zero-emission goals.

In response, Rooney said: “We’ve set the goal of being fully EV by 2025. [The supply situation] is threatening that, right now. It’s not just EV supply, it’s all vehicle supply, so the minimal diesels we do have on order aren’t coming through.

“It is affecting commercial [vehicles] more than cars, [which are] obviously a more profitable sector for motor manufacturers, so cars tend to get through in a fairly timely fashion, and LCVs, especially electric LCVs, are left behind.

“If something doesn’t change soon, then targets – not just that we’ve set, many other companies have – will be, if not jeopardised, moved back.”

Giving his thoughts, ISS head of fleet and travel Duncan Webb said: “I am genuinely concerned about vans. With the new regulations that are going to come in in 2024, in terms of a percentage number of vehicles that should be EV, I’m concerned about vans becoming a forgotten part of that.

“The fact we drive on the wrong side of the road compared to most of the world as well means production is more limited.

“[It’s a] massive risk. It shouldn’t alter our ambitions though.”

The conference also saw the AFP give an update on its kerbside charging project, which has seen it compile a database, based initially on information from major fleets, of where chargers are needed, with the organisation now appealing for all fleets to come forward with further data.

AFP chair Paul Hollick said: “Particularly for vans, if we can’t get charge points where we need them, we are going to have significant problems in the medium term with our EV deployment.

“[The database] will significantly, hopefully, help the [charging] industry, to know where they want to invest their money.

“Charge point operators, government, local authorities – everybody will hopefully start to see this map and say yes, actually, we can understand where national fleets need charge points and this effectively will mean we get charge points we need.”

More evidence of the need for van fleet electrification was offered at the conference by Royal Mail head of fleet transformation and integration Stuart Murphy, which highlighted the importance of customer demand.

He said: “We talk about delivering people’s mail, and the first thing they say is ‘Give us your environment plan’.

“It’s no longer ’What’s your quality of service?’ or ‘How much is it going to cost me?’, it’s ‘How green are you?’, and that’s the biggest challenge.

“For us it’s been about lining our strategy up and saying we are going to take this head on and do the right thing, because our customers deserve it.”