The Kombi spent its first few weeks on our fleet engaged mainly in urban assignments around and about the streets of London, but now it has got more miles on the clock, following several longer trips out of town, its average fuel consumption has improved considerably and is currently scoring slightly better than Volkswagen’s stated combined consumption on the WLTP cycle of 34.0mpg.

While the Transporter’s official fuel consumption is less impressive on paper than rivals such as the PSA medium vans – the Peugeot Expert, Citroen Dispatch and Vauxhall Vivaro – this is pretty good going.

When it comes to refuelling, the fuel cap is located on the B-pillar next to the front passenger door, which has to be unlocked and opened in order to access it; a neat security touch. The AdBlue tank is situated in the same spot.

The Transporter Kombi adapts impressively to all driving conditions. It is easy to manoeuvre in congested city streets, where the slick seven-speed dual-clutch DSG takes the strain out of journeys where frequent stopping and starting is par for the course. The 150hp drivetrain delivers its power to the wheels swiftly and smoothly whether in town or out on the open road. 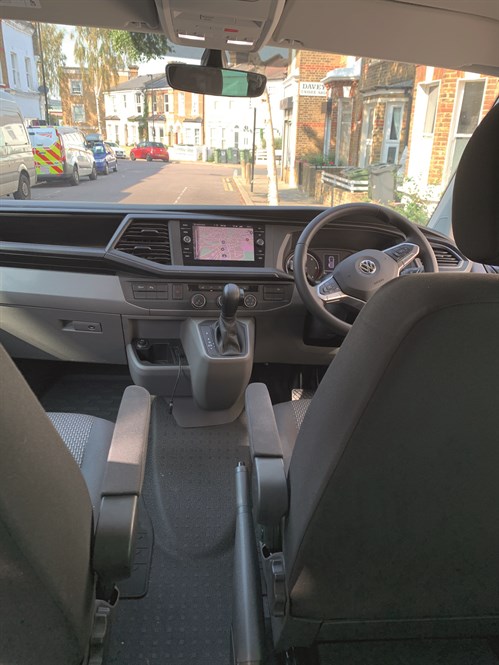 The excellent rear-view camera, a £235, excluding VAT, option on our van, makes parking a stress-free undertaking, as do all-round sensors, which also help when negotiating traffic-calming devices such as road-narrowing gates and tight chicanes. With no bulkhead behind the rear seat backs the driver can also make use of the rear-view mirror, but the wing mirrors could stand to be a little larger to make the driver completely confident no hazards are lurking to the sides of the van, such as cyclists, of which there are now far more on the capital’s streets thanks to the proliferation of measures to encourage people out of motor vehicles. Despite the installation of more cycle lanes there are still many routes where cars, vans, trucks, buses and bikes are obliged to share confined spaces.

A consequence of the accelerated programme in London to close a high number of roads, including bridges, to motor traffic over recent months has been not only to force more vehicles onto the busy main roads but to confuse the Kombi’s otherwise precise satnav, so it has been a relief to escape the city’s limits.

On faster, extra-urban journeys I’ve come to appreciate how the Transporter’s new electromechanical steering system, handed down from its big brother, the Crafter, has improved handling by delivering more feedback and precision, making the van more dynamic to drive than its predecessors on the open road as well as more easy to manage in urban situations. As previously noted, the 150hp 2.0-litre TDI engine is impressively responsive and comes into its own on longer, intercity assignments. Adaptive cruise control is a welcome standard addition on the Highline model and makes for a far more relaxing and safer motorway driving experience.

Meanwhile, the portable waste bin that fits snugly into the door storage compartments has also come into its own on longer trips as a receptacle for receipts, sweet wrappers and, during these times, disposable face masks.

Equally impressive in the city or out on the open road.