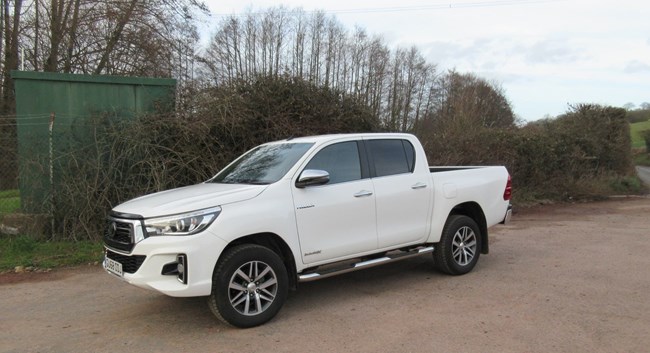 Rugged and dependable, it is the go-to workhorse for anybody who has to tackle a muddy and severely pot-holed farm track or a steep rural hill covered in snow and ice,

A huge hit globally, it celebrated its 50th anniversary last year. But Toyota is not a company content to rest on its laurels. Last year saw it unveil the top end of the range, the four-door five-seater Invincible X Double Cab, at the Commercial Vehicle Show and it appeared in dealerships during the third quarter of 2018.

The Invincible X stands out from the rest of the Hilux pack because of the different front-end treatment it has received. It consists of a new grille with glossy black inserts and a contrasting chrome frame plus a new-look front bumper, fog lights and silver under-run. A silver under-run appears at the rear too, with a new step to make it easier to access the cargo area. Steps are incorporated into the sill bars as well.

The cab gets its own internal styling, which follows an all-black theme with leather-trimmed seats and a contrasting chrome instrument panel trim.

The Hilux specification walk starts with Active, then progresses through Icon and Invincible before it reaches Invincible X. Special editions are listed including one still available that marks the model’s half-century, achieved last year. And check out the AT35 conversion by Arctic Trucks.

All Hilux pick-ups are sold with four-wheel drive and you can choose the extended two-door single-cab or extra-cab instead of the double-cab.

Only one engine is on offer: a 148hp 2.4-litre diesel, and you can order it with either a six-speed manual or a six-speed automatic transmission. Opt for Invincible X – which is what we did – and the auto ’box comes as standard.