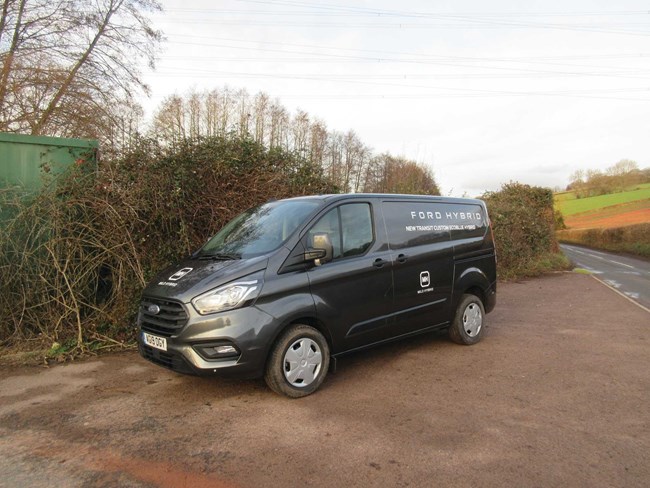 All sensible light commercial operators can see the need to reduce fuel consumption and thus CO2 output, not to mention emissions of NOx, particulates and other harmful pollutants.

At the same time they are cautious, and not necessarily ready to head down the battery-electric or plug-in hybrid route yet. If they opt for Ford’s remarkably successful front-wheel drive Transit Custom, however, then they can avail themselves of a handy halfway house.

It features a belt-driven integrated starter/generator (BISG) rather than an alternator plus a 10Ah 48V air-cooled lithium-ion battery that sits under the passenger seat. The BISG enables the battery to capture and store energy that would otherwise be lost when the van decelerates, and use it to power the Custom’s electrical system, including its electric power steering.

Result? Less effort is required from the engine, and that spells good news for fuel usage.

The BISG also acts as a motor, using the stored energy to provide the engine with a bit of torque assistance when the driver accelerates. That too has a positive impact on fuel usage.

What is more, the MHEV is fitted with an upgraded auto stop-start system that cuts the engine as soon as the Custom is stationary, even if it is still in gear.

It also kills the engine if the van is coasting to a stop, while the driver can adjust the coasting speed at which it operates: the range of adjustment is from 7mph to 12mph. It can be switched off if necessary.

The consequence of all this technology is that diesel consumption is said to be down by anywhere from approximately 3% to as much as around 8%.

The MHEV package is married to the 130hp version of the Custom’s 2.0-litre Ecoblue diesel engine. But the powerplant is also up for grabs at 105hp, 170hp and 185hp – the last-named is a recent arrival – and has recently benefited from an upgraded turbocharger plus new fuel injectors operating at a higher pressure of up to 2,200 bar.

Other changes include the introduction of steel pistons, which replace the old cast-aluminium ones and have a slimmer skirt design, plus a variable-flow oil pump. It reduces parasitic losses by adapting oil delivery to demand.

These changes should cut the Custom’s mpg figure by up to 6%, says Ford, before the benefits claimed for the MHEV are added to the equation.

We got to grips with Ford’s MHEV offering in a short-wheelbase standard-roof Custom in Trend trim, and we enjoyed the experience. It costs £700 more than the standard diesel model.