Alternative fuels are coming to the fore and the Volkswagen Crafter is starting to punch its weight in the sector, James Dallas reports. 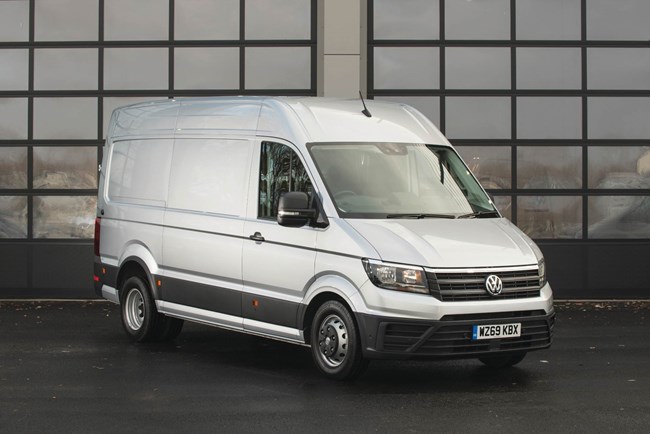 Sales of new models in the big-volume 2.5t to 3.5t sector, which includes large vans, fell 2.8% in February year-on-year to 9,082, providing an accurate barometer of the market overall, which dipped by 2%.

February is one of the lowest-volume months however, as many operators keep their powder dry until the March plate-change, and over the first two months of the year the sector was down by just 1.7% to 22,236, according to the SMMT.

The familiar names of the Ford Transit and Mercedes Sprinter appeared in the top three sellers for February (behind the Ford Transit Custom) and this pair were the top sellers in 2019 too, shifting 26,237 and 25,862 units respectively, way ahead of the Peugeot Boxer on 9,692, which was separated from its stablemate the Citroen Relay (7,236) by the Volkswagen Crafter, of which 9,233 examples found homes.

The Crafter performed strongly last year, a reflection of it becoming steadily more established in the market following its launch in 2017.

VW claims Crafter sales rose by 44% year-on-year in 2019, in contrast to sales of its Caddy light van and Transporter medium van, which both declined, although it should be noted they were nearing the end of their life cycles.

Corporate business played a significant role in driving up sales, and Volkswagen Commercial Vehicles’ head of sales James Douglas says that of the 20 largest Crafter customers in the UK, eight are newcomers to the van.

He adds, however, that sales to local businesses and SMEs have kept pace with this growth.
The Crafter is the bedrock of Volkswagen Commercial Vehicle’s Engineered to Go scheme, and last year a crane conversion was added to the portfolio courtesy of Penny Hydraulics, which is a member of the brand’s Integrated Partner programme.

Ford is also growing its Transit-based conversion capability with new additions this year, including a new front-wheel drive version dedicated to heavier conversions such as motorhomes, horseboxes and ambulances. Ford says the FWD skeletal chassis range provides customers with a low-height platform for body conversions and claims the new L5 option will offer a best-in-class 4,522mm wheelbase.

Ford is to launch an electric Transit in 2021 and Volkswagen has already trialled its e-Crafter in the UK, although it is still not clear when this will come to market in right-hand drive.

Renault’s electric Master Z.E. is already on sale and the manufacturer now also has a hydrogen derivative of the van available.

Renault Trucks, meanwhile, is to launch a 3.5t Master Z.E. in both van and chassis cab guise. Due in May, the newcomer will offer roughly 350kg more payload than the existing 3.1t Master Z.E. and will be fitted with a more powerful electric motor.

Having a 3.5-tonner with its extra payload capability will make it easier for Renault Trucks to market electric tippers and also refrigerated vans under its Ready for Business conversions programme.

Power for the tipping gear and fridge units will be provided by separate lithium-ion battery packs so that the traction batteries will not be depleted, and the refrigerated Master Z.E. models will be chilled only. A fully frozen conversion would draw too much energy.

In April, LDV is to rebrand as Maxus in the UK to bring it in line with other European markets. Maxus was the name of LDV’s 3.5t van after it was taken over by Chinese manufacturer SAIC in 2009. To coincide with the rebrand Maxus is planning a range refresh, with the launch of a new large van, the Deliver 9, to replace the ageing V80. It will feature a new platform and a 2.0-litre engine.

The power of three