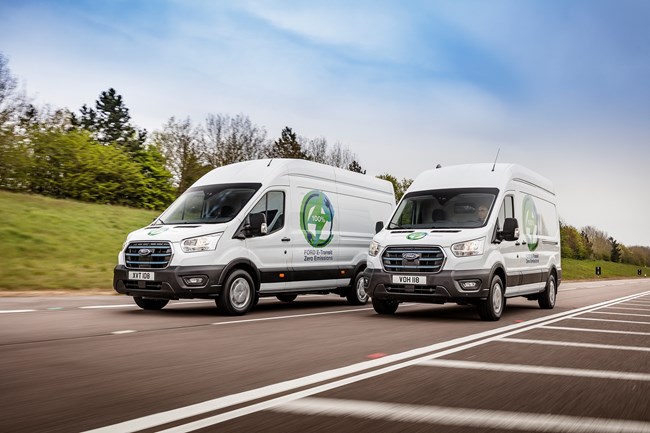 Connectivity and electrification will be the focus of Ford’s stand at this year’s CV Show, the manufacturer has announced.

Among the exhibits will be a digital introduction to Ford Liive, the manufacturer’s connected system designed to help operators increase productivity and maximise vehicle uptime.

The stand’s digital display will demonstrate Ford Liive’s features and benefits through a series of screens tracking vehicles in service.

The show will also see Ford give a UK debut for the E-Transit, the new all-electric version of the iconic large van, set to offer around 200 miles of driving range with a variety of body, length, roof height and GVM options available.

Features of the E-Transit include Pro Power Onboard, providing up to 2.3kW of electricity to use power tools and recharge equipment at job sites, and FordPass Connect services.

Also on the stand will be the new special edition Wolftrak and Stormtrak versions of Ford’s Ranger pick-up, which are priced from £27,776 and £35,151 respectively excluding VAT.

Also appearing from the Ranger line-up will be the new Raptor Special Edition model, due to go on sale in the UK later this year, priced from £42,950 excluding VAT, and the new Ranger chassis cab, priced from £23,200.

The Ford stand will also feature displays from members of the manufacturer’s approved converters programme, including MS-RT, which will show vehicles including its new Ranger conversion, and Clarkes, which will show its Transit Welfare Vehicle.

Ford of Britain and Ireland managing director Lisa Brankin said: “The CV Show has always been a calendar highlight and that’s especially the case this year.

“Ford’s new offering of connected services in Ford Liive will further enhance our acclaimed vehicle range, which now includes the E-Transit battery electric two-tonne van from 2022, to ensure we deliver on our promise to keep customers’ businesses moving as we move to an all-electric future.”

The CV Show takes place at the NEC in Birmingham between 31 August and 2 September.