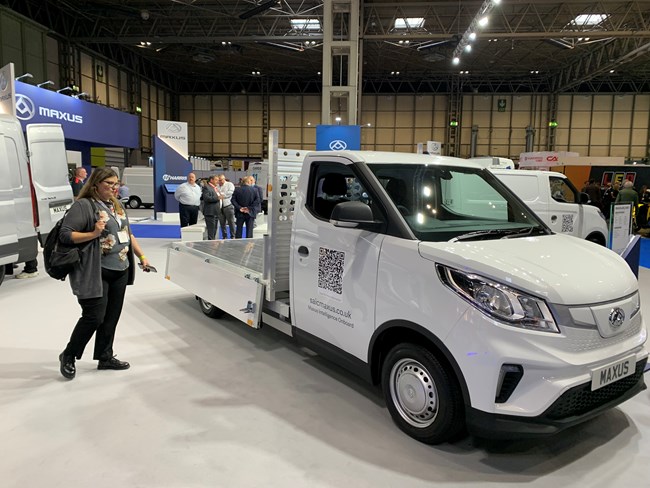 Maxus showcased a selection of its eDeliver 3 and eDeliver 9 electric vans at the NEC.

Highlights included a long-wheelbase derivative of the large eDeliver 9 and fridge, high roof and dropside conversions of the eDeliver 3 compact van. The latter was a new reveal and boasts a 1.0-tonne payload, making it “a perfect city vehicle” for local authorities, according to Maxus UK and Ireland general manager Mark Barrett.

Barrett says the brand sold 1,300 units in the UK in the year to the end of August, 54% of which were electric models. It has also expanded its dealer network by 40% to a total of 41 UK outlets.

Looking ahead, Barrett says Deliver 9 and eDeliver 9 crew cab vans will launch in October and adds that an electric two-wheel drive pick-up truck could be on the horizon for the UK in 2022 if the importer can get the go-ahead from SAIC, its Chinese parent company.

“We are pushing like there’s no tomorrow for the ET90,” he said.

In addition, Barrett says a medium-sized van slotting into the line-up between the eDeliver 3 and Deliver 9 will go into production towards the end of 2023.