What Van? Awards: One to Watch – Ford E-Transit 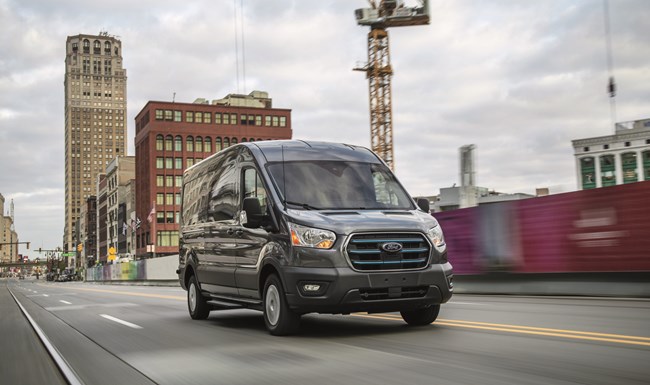 When the biggest-volume light commercial vehicle brand in the land announces details of the forthcoming arrival of its first all-electric van then the rest of the sector sits up and takes notice.

Ford is late coming to the electric market, all it has by way of an alternatively-fuelled van currently on sale is the Transit Custom PHEV (plug-in hybrid electric vehicle) and some rival manufacturers, such as Vauxhall, its Stellantis stablemates Citroen and Peugeot, and Renault, may feel they have stolen a march on the blue oval.

So a lot hangs on the market response to Ford’s first pure electric van, the E-Transit.

Ford gave a European public debut to its E-Transit at the Commercial Vehicle Show in August.

The large electric panel van will have a price tag of £42,695, excluding VAT and the Plug-in Van Grant, which will reduce the price by a further £6,000, when it comes to market at the beginning of 2022. The manufacturer says the chassis cab version of the model will cost about £1,000 less.

The E-Transit comes with 68kWh battery capacity, which provides a claimed range of up to 196 miles on the WLTP cycle. An electric motor with outputs of 135 or 198kW delivers 430Nm of torque, according to Ford, while payloads extend up to 1,758kg in a line-up that includes 25 variants with van, double-cab-in-van and chassis cab body styles covering multiple lengths and roof heights with gross vehicle weights from 3.5 to 4.25t.

The E-Transit is available with a ProPower Onboard feature, which delivers up to 2.3kW from standard plug sockets in the cab and load area to power tools, lights, laptops and conversions such as refrigeration units.

Ford Pro, the manufacturer’s sales and servicing division for commercial vehicle customers, will help operators facilitate depot, home or public charging. The depot charging solution will include both hardware and installation, as well as smart software tools to enable businesses to schedule and optimise their vehicle charging, says Ford.

Through Ford Telematics, fleets can manage the payment of public charging as well as organise the reimbursement of employees who charge vehicles at home. Drivers can also locate charging points and bill for charging while on the road via the Ford Charge Assist app integrated into the E-Transit’s new SYNC 4 communications and information system and accessible via the 12in touchscreen. Ford says the E-Transit can be charged from 15–80% in 34 minutes from a 115kW DC fast charger. An overnight full charge from a standard 230-volt AC supply takes around eight hours.

The E-Transit is available in two grades, Base and Trend. The Base comes with standard features including Electronic Air Temperature Control, SYNC 4, keyless start, heated seats, Quickclear Windscreen and heated power mirrors, plus connectivity through the FordPass Connect modem, a lifetime subscription to FordPass Pro or Ford Telematics Essentials, access to the FordPass charging network for a year and a one-year subscription to Ford Telematics for fleet customers. The Trend series adds satnav, cruise control, pre collision Assist with pedestrian detection,  lane departure warning,  lane-keeping aid and front and rear parking distance sensors.

Ford is currently trialling the E-Transit in the UK, with corporate fleets such as Balfour Beatty, DHL Express and DPD, as well as Ocado.

Another One to Watch: Vauxhall Vivaro-e Hydrogen 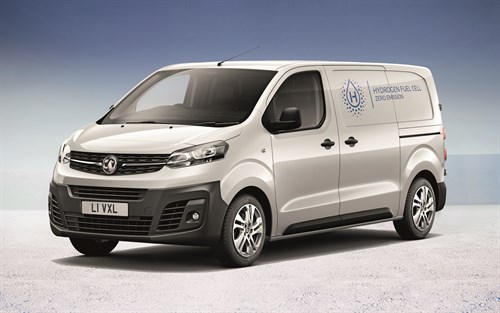 With the Vivaro-e Hydrogen in the pipeline, Vauxhall is already looking ahead and taking a lead in alternative-fuelled LCVs with a version of its best-selling van that will be ready to come to market when the hydrogen charging network for LCVs is further developed.

Vauxhall says it will be able to cover 249 miles on a single tank of hydrogen, which can be refilled in three minutes.

The model is based on the existing battery-electric Vivaro-e, and along with the 45kW fuel cell will also feature a 10.5kWh lithium-ion battery, capable of being charged with a plug for a range of 31 miles, and also providing extra power when required, such as on start-up and under acceleration. No modifications are needed to the Vivaro-e’s body, with 4.95m and 5.3m wheelbase options and a payload of 1,100kg.

The Vivaro-e Hydrogen is due to arrive in the UK in right-hand drive form from early 2023.