WHAT VAN? AWARDS - WINNER'S PROFILE: Master of its own destiny 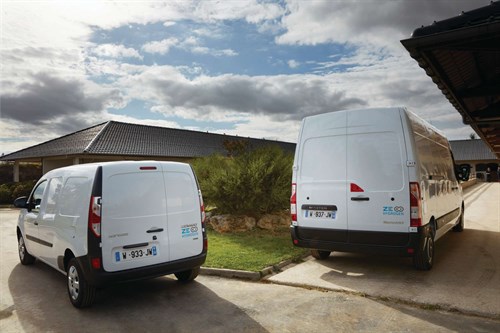 Renault has produced hydrogen-electric versions of its Kangoo and Master

(Continued from page 1) Whitcombe adds that within its fleet field team Renault has dedicated EV fleet support specialists, who work with businesses and public sector bodies on a consultancy rather than sales basis to explore whether the switch to electric is possible and beneficial for them.

“We are unique in offering such a resource,” Whitcombe claims.

As a result of its well-established supply chains (Renault has been making and selling electric vans since 2011), he says the manufacturer has been able to supply customers with electric vans with comparable lead times to internal combustion engine (ICE) variants.

“This ability to supply world-class all-electric vans has seen major fleets approach us, as we capitalise on the growing demand for these vehicles,” he says.

Aside from plug-in electric vans, Renault has recently produced hydrogen-electric versions of its Kangoo and Master with respective ranges of 230 and 217 miles, according to the manufacturer. So, is there a market for these vans in the UK, which is behind other countries in exploring the potential of this fuel source? (There are currently just 14 charging stations in the UK.)

“Whilst the infrastructure for hydrogen is in its infancy in the UK,” says Whitcombe, “there is growing interest for hydrogen-powered vehicles, and Renault UK is exploring with our customers possible opportunities.”

The brand has not abandoned diesel yet, however, and has this year launched a sporty and highly-specced Black Edition to sit at the top of its Trafic range.

Whitcombe expects the model to appeal to owner-operator customers looking for a style-led mid-size van. He adds that its residual value forecast in comparison to the established Sport trim has indicated its desirability with a 2.2% uplift.

“There is a growing demand for higher-specification models. Whether it be user-choosers looking for more style and car-like comfort and convenience, or company fleets choosing to look after their drivers with comprehensive ADAS (advanced driver-assistance systems) features to protect their wellbeing and reduce accidents,” he observes.

So what’s in the pipeline for this year? Well, a new Kangoo based on the 2019 Kangoo Z.E. show van will be launched for a start.

The Kangoo, of course, is the model that Mercedes’ Citan is based on, but Whitcombe is a tad coy when it comes to revealing whether this arrangement will continue, while acknowledging that platform-sharing deals are strategically important for manufacturers from a financial perspective.

“Groupe Renault will continue to explore all partnerships that allow us to bring world-class products to market whilst sharing economies of scale and development costs with like-minded partners,” he says.

The government has set a deadline of 2035 to phase out the ICE, and Renault appears to be better prepared than most for an alternative future.

“If government continues to support businesses to switch to electric, then we could anticipate a reduction in diesel van volumes,” says Whitcombe.

“Currently, Renault is working to offer customers a wide choice of powertrains across all our products to best meet the needs and usership of LCV buyers.”